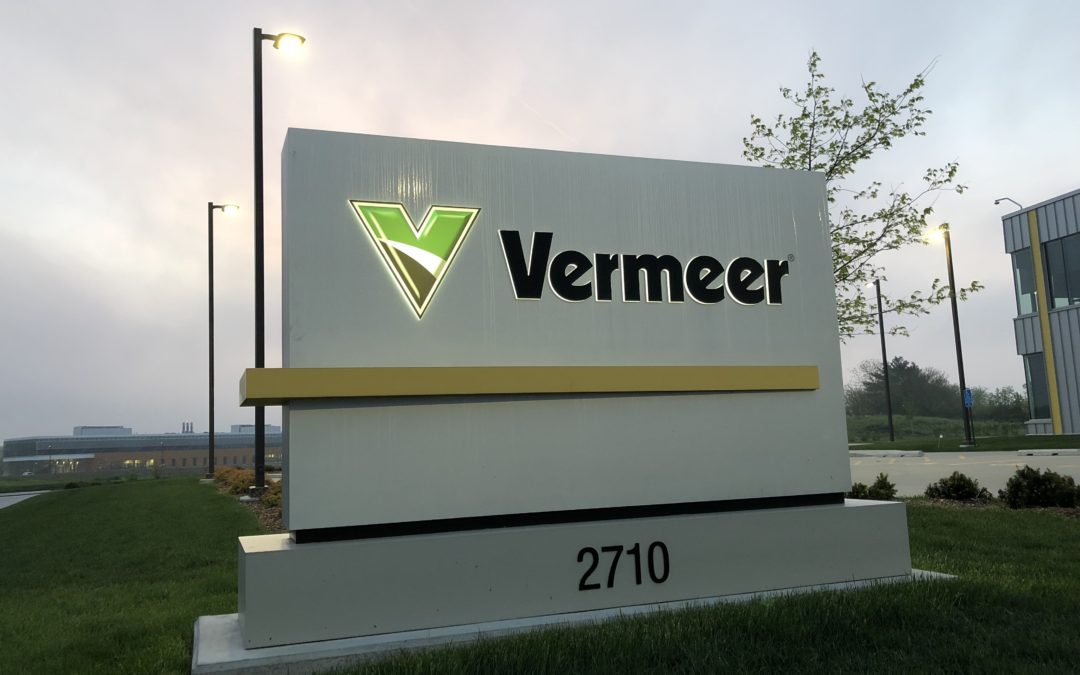 As an Iowa-based company, Vermeer Manufacturing has always had a close relationship with Iowa State University. And in recent years, that relationship has only grown closer as Vermeer has established a physical presence in Ames, just minutes from where its next generation of leaders is getting its schooling.

Founded in Pella in 1948, today Vermeer supplies the world with an array of agriculture, construction, surface mining, tree care, organic recycling, and wood waste processing equipment. Many of its technological advances have been spurred by Iowa State grads. So it only made sense early in 2012 for Vermeer to increase its presence in Ames with the opening of an “incubator” office in the Iowa State University Research Park. The office was designed to give students space to work on real-life projects, guided by experience Vermeer engineers and staff.

The partnership began to pay dividends right away – both for students and Vermeer. Not surprisingly, Vermeer soon made plans to establish a permanent office in the Research Park. Just six months after opening the incubator, Vermeer cut the ribbon on an office with two full-time staff and room for as many as 15 interns and/or part-time staff.

Today, the office is a hub of activity. With Vermeer filling nearly half of its annual internships with Iowa State students, it offers students convenience… and a foot in the door.

From Intern to Engineer

Matt Dresser was among the first batch of interns to work from the office in the Research Park. An electrical engineering major, Dresser says the opportunity to perform an internship at Vermeer was valuable.

“The internship gave me insight on how Vermeer machines are used on the jobsite,” Dresser says. “I was able to help identify ways we could make them more useful and more efficient.”

So impressed with Vermeer, Dresser says it was a no-brainer when he was offered first a part-time position while still in school, and then a full-time position upon graduation. Today, he works as an embedded software engineer, spending three days a week at the Ames office and working two days a week from an office in Pella.

Dresser is involved in research and development and often works with students at Iowa State, either collaboratively to overcome challenges he’s found in his work, or providing guidance on Capstone projects for students preparing to graduate. He says the synergies between Vermeer and Iowa State cannot be overstated.

“There is a general interest in having a free exchange of ideas,” Dresser says. “The goal is to identify the trends and implement the strategies and processes that will push Vermeer forward.

“The relationship with Iowa State is important in making that happen,” Dresser continues. “There are so many good ideas coming out of Iowa State. Sure, as an organization Vermeer could recruit from all over the world, but there are such great minds right here in Ames. And the easier we make it for those minds to come together at the same table, the greater impact we can have.”

And that atmosphere of collaboration is only growing.

“We are moving closer and closer by the day,” Dresser says. “We want to be a team. We know we can help one another.

“And can it be any more convenient? There is a wealth of knowledge, literally, right across the street.”

A career in agriculture was a likely path for Alex Herzberg. Growing up on a farm, he was no stranger to heavy equipment and relished the sun-up to sun-down nature of a farmer’s work. In his sophomore year, he applied for an internship with Vermeer.

Familiar with the large equipment provider, he says he was excited when he landed one of the coveted intern positions. Now a senior preparing to graduate in the spring, he says his work with Vermeer has opened his eyes to all that goes into the hay balers, tree trimming equipment and other heavy machinery he’d see as a youngster living in the country.

“I’ve gotten to see a lot of sides of Vermeer,” Herzberg says. “I started with underground equipment used in mining and have worked on projects involving most of the equipment we offer.”

He will join the Vermeer team upon graduation and immediately going into the company’s engineering development program. The program is designed to expose the mechanical engineer to even more of the company and find a fit for him where he can be successful. After about six months in the program, he will take on a permanent position.

Herzberg says Vermeer’s commitment to finding talent at Iowa State is to be admired.

“It just goes to show they value their roots in Iowa and see the quality of students Iowa State offers,” Herzberg says. “And my experience as an intern opened me up to so much more than I thought possible. Vermeer has offered me so many opportunities in so many different product lines. It’s a win-win.”

As is the proximity of Vermeer’s office to campus.

“When students have questions, Vermeer is right here,” Herzberg says. “They can find a fresh perspective and a different way of looking at things that, as a student, we may not have thought of.”

But the benefits of the relationship aren’t limited to the students of Iowa State.

“Vermeer has ready access to the talent that is coming out of Iowa State,” Herzberg adds. “By offering internships and part-time opportunities, they are able to identify students who would be a great fit and bring them up to speed so they are ready to go as soon as they graduate.”