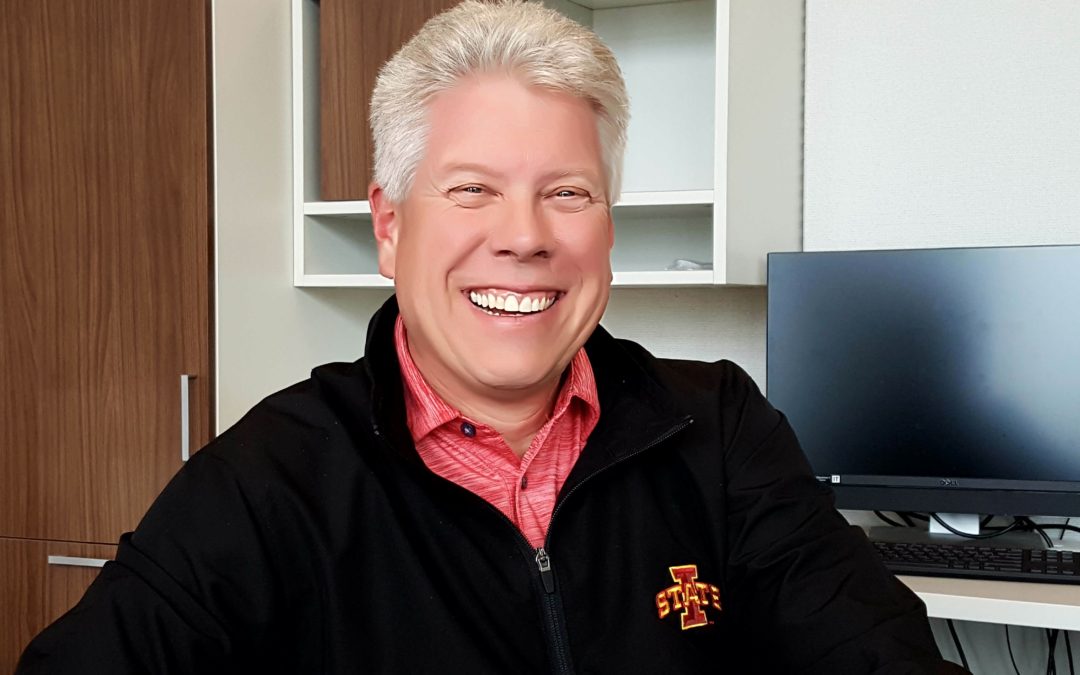 The following article originally appeared on May 7, 2019 via the Ames Tribune, by Robbie Sequeira, Staff Writer

In a journey that included a few managerial roles with a minor league baseball club in Birmingham, Ala. and a ice hockey club in Montana and serving as a county-elected official for nearly nine years, with a few stops in between, Rick Sanders will now assume the role of president of the Iowa State University Research Park.

“I believe that any time you start to consider a change, whatever that change is, you also open the door to other possibilities,” said Sanders in an interview with the Tribune on Tuesday.

Sanders, who has served on the Story County Board of Supervisors since 2010 and was elected last fall to his third term, announced Tuesday that he would step down effective May 31 to become the research park’s next leader.

Sanders, who has championed economic development during his tenure on the board, will fill the vacancy created when Stephen Carter retired at the end of 2018 after 18 years at the helm. Former Iowa State University vice president of finance Warren Madden has been serving as interim president. Sanders will begin his new duties on June 1.

Sanders, a Republican who flirted with the idea of challenging incumbent Congressman Steve King, said that the opportunity popped up on his radar in early 2019.

“The more I talked about it, the more I realized that it was not only something that I think I’m built for, it was something I could get really passionate about,” said Sanders, who attributed his passion for “pro-growth” in all areas as a benefit for his new role. “I was thrilled to get the offer.”

Sanders, who beat out four other finalists in a nationwide search, takes over a thriving economic hub that spans more than 400 acres and is home to 90 companies and about 2,050 employees, according to the Research Park’s website.

“Rick has big shoes to fill and yet we are confident that he brings to ISURP the network, enthusiasm, contacts, and knowledge to make an immediate impact,” said David Spalding, Iowa State University interim vice president of economic development in a press statement. “We feel Rick is uniquely poised to carry that momentum forward.”

When he starts on June 1, Sanders said one of his chief goals is to help the Research Park fulfill its mission to ISU in its day-to-day operations.

“How do you do that? You grow,” he said in a meeting with the Ames Tribune Tuesday afternoon. “You continue to give great opportunities to students to enter the business world, great opportunities to young entrepreneurs to take whatever their idea is and see if they can bring it to fruition, and the opportunity to maximize any technology that’s coming out of the University. We’ve got to try to make sure that we’re giving a great pathway for those (ideas) to see the light of day.”

“Many people view the (ISU Research Park) as the Ames Research Park, and that’s not what it is,” he said. “It’s the Iowa State University Research Park. The only reason it exists is to help ISU fulfill it’s mission of positively impacting the state of Iowa. It’s so much bigger than Ames and Story County or even the cultivation corridor of Central Iowa.”

For the newly-appointed president, there’s no limit on the Research Park’s influence in the state and the enumerable benefits it can bring to its host, Iowa State University.

“If this is done right, the case is going to be made successfully, that the Iowa State University Research Park can and should positively impact us from river-to-river and border-to-border,” said Sanders. “And it should be another entrance point to Iowa State University and its student and talent and expertise.”

As Sanders preps for his new role, which includes frequent appearances at the Park and face time with employees and staff, his colleagues at the Board of Supervisors wished him well on Tuesday.

Supervisor Chair Linda Murken thanked Sanders for his years of public service and for his help in acclimating her to the board since her election last fall. Supervisor Lauris Olson also wished him well in his new position.

“I wish you the best of — I wouldn’t say luck because I know you’re capable of it — and we’re looking for you to do good things,” Olson said.

Dan Culhane, president and CEO of the Ames Chamber of Commerce, said Sanders will be a good fit for the Research Park position.

“I think it’s a unique opportunity for Rick and great opportunity for the research park,” Culhane said. “His fire and enthusiasm tends to be contagious. I think his persona will lend itself well to promoting and marketing the park and the community.”

Culhane said Sanders is a known commodity in the community and that will benefit Sanders as he begins his tenure leading the research park.

“There’s a value to being able to hit the ground running,” Culhane said. “The first 100 days you’re looking to make as many connections as you can and a lot of that legwork is done for Rick.”

With a 1000-watt smile on his face during his interview with the Tribune, Sanders said he’s thrilled to assume his new role.

“I said it in my cover letter when I applied, this opportunity gives me the ability to take a very narrow segment of what I’ve worked on as a supervisor and what I’ve been most passionate about and turn it into a full deal,” Sanders said. “I’m extremely excited.”