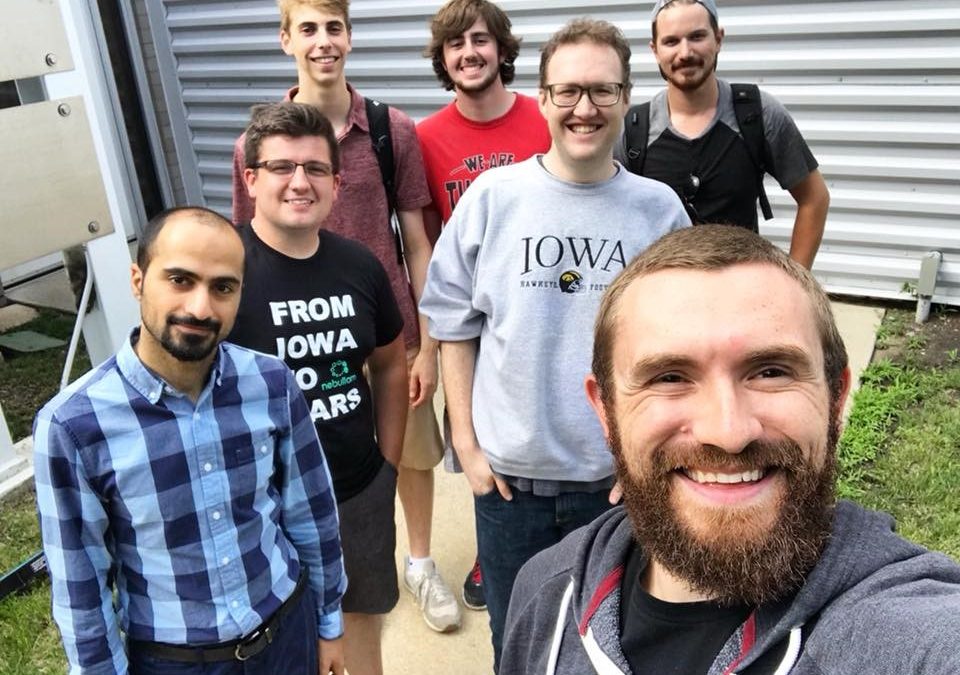 AMES, Iowa (September 25, 2018) – The Iowa State University Startup Factory (SUF) today announced the Iowa Economic Development Authority (IEDA) board has awarded Nebullam $100,000 in innovation funds as recommended by the Technology Commercialization Committee. Nebullam is a member of SUF’s cohort 2 which graduated from its year-long program in January 2018.

Nebullam is a product-as-a-service company, providing High Pressure Aeroponics (HPA) growing units, paired with artificial intelligence. Its technology is designed for commercial producers in leafy green, microgreen, and pharmaceutical production, as well as plant R&D. The $100,000 from the Demonstration Fund will be used for technology refinement of its machine vision applications.

Founded in a region of the United States with, arguably, the richest soil on the planet, the young Ames-based startup is aiming to revolutionize farming – without any of that soil. Employing a combination of high pressure aeroponics and artificial intelligence, Nebullam is making waves in an increasingly competitive indoor farming industry.

The company was founded in 2016 when two former community college classmates reconnected. Today, Nebullam is operating a model farm within the Iowa State University Research Park, which is generating income from its produce sales, while providing proof of concept for their innovative approach to agriculture.

“It took me about six years to get a few systems up and running as a hobbyist,” co-founder Danen Pool says, looking back. “I did all of the initial work in my home and it was promising. With the first very rudimentary system, I could shorten growth cycles considerably.”

With the technology, even in a very early stage, developed and tested, Pool knew that he needed some help with the business aspects of bringing his system to market. Among those at the top of Pool’s list was Clayton Mooney, a former classmate at Indian Hills Community College who had spent time as a professional poker player, before co-founding startups within the food and technology space.

Mooney became the Chief Executive Officer, they settled on the name AeroLands, and began the startup process in earnest. 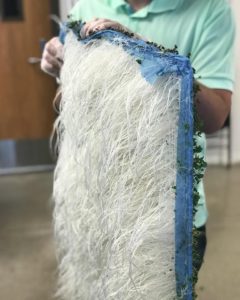 Pictured are the roots of micro arugula, grown from seed to harvest in less than 1 week.

In the search for help in solving the automation challenge, Pool and Mooney met Mahmoud Parto, who would eventually become the Chief Software Architect and final member of the founding team.

With a full founding team established, the trio began looking for opportunities to become bigger and better. In December of 2016, they were accepted into the second cohort of the ISU Startup Factory.

The Nebullam team credits the Startup Factory with providing them lessons on best practices in building a business while pushing them into a formal customer discovery process. They said the year-long program proved invaluable in clarifying the company’s vision, developing a plan for growth, establishing customers, completing a friends and family round of investment, and preparing the team for pitching to larger investors. They also settled on the name change to Nebullam during their participation.

As part of their participation in the Startup Factory, the team was provided office space in the Vermeer Applied Technology Hub in the Iowa State University Research Park. With a location so close to Iowa State, it offered more than a place for meetings and to sit down in front of a laptop. It offered access to top tier interns to move the company forward.

Now “graduates” of the Startup Factory and a series of other accelerators and business development programs, the team at Nebullam has swelled to 11. They have settled on a hardware + software model that will enable indoor growers to leverage artificial intelligence to fully automate the growing and harvesting process. This is a major differentiating factor for Nebullam when compared to others in the marketspace.

“There are a lot of startups on the hardware side, and a lot of others on the software side,” Pool says. “But running those varied systems together, there is a huge learning curve for the producer. We eliminate that. If you are powering your grow with Nebullam, we’ve eliminated compatibility issues or learning curves.”

“The Demonstration Fund award for $100,000 will allow us to further refine our machine vision application, which is critical for scaling our software capabilities for customers all over the world,” Mooney says. “We are grateful for the support, and excited to continue growing Nebullam from our headquarters in the Iowa State University Research Park.”

About Startup Factory
The Iowa State University (ISU) Startup Factory is a 52-week intensive program housed at the ISU Research Park (ISURP). Entrepreneurs in the Startup Factory receive formal training, resources, and access to a network of business mentors, advisors, counselors, and investors in two 26-week blocks: the first a formal curriculum centered on business validation, and the second, customized to their individual business needs. For more information on the ISU Startup Factory program, call 515-294-7444 or visit isustartupfactory.org

About Nebullam
Nebullam is a product-as-a-service company, providing High Pressure Aeroponics (HPA) growing units, paired with artificial intelligence. Its technology is designed for commercial producers in leafy green, microgreen, and pharmaceutical production, as well as plant R&D. For more information about Nebullam, call 641-201-0651 or visit nebullam.com