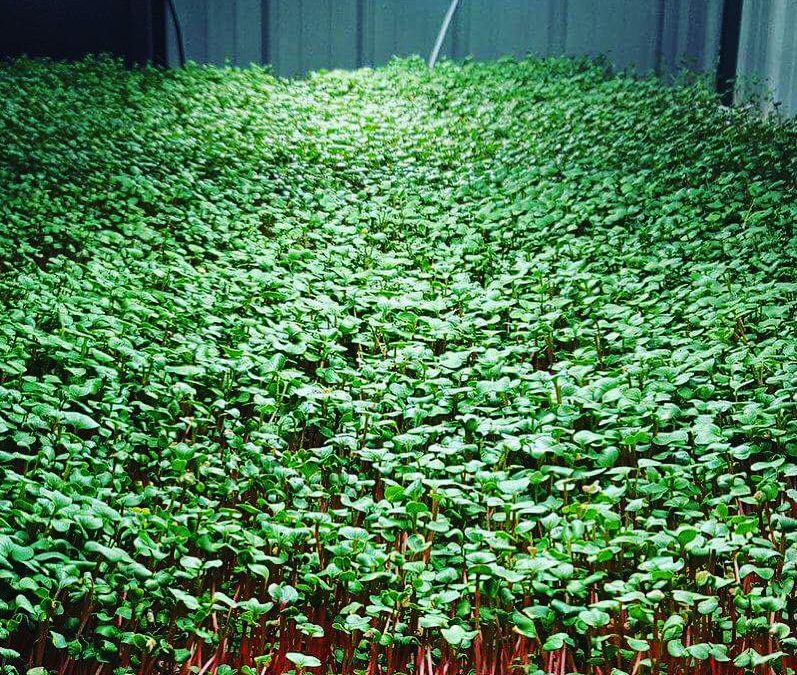 Founded in a region of the United States with, arguably, the richest soil on the planet, a young Ames-based startup is aiming to revolutionize farming – without any of that soil. Employing a combination of high pressure aeroponics and artificial intelligence (AI), Nebullam is making waves in an increasingly competitive indoor farming industry.

The company was founded in 2016 when two former community college classmates reconnected. Today, Nebullam is operating two model farms – simultaneously generating income to keep the lights on and providing proof of concept for their innovative approach to agriculture – and seeking investment from engaged venture capitalists across the country.

The Genesis of an Idea

The seed for Nebullam’s founding was planted almost a decade ago when Danen Pool, co-founder and Chief Technology Officer, made a trip to Africa.

“The purpose of the trip was to provide water chlorinators to people in Swaziland and Johannesburg, South Africa,” Pool says. “A lot of the areas we visited were in a very arid climate. There was not a lot of fertile soil and produce had to be shipped in from long distances. It got me thinking about how you could sustainably grow produce in an area like that and that led me to begin researching different types of non-traditional growing techniques.”

That was in 2010. For months, Pool spent his free time experimenting with various forms of hydroponics and drip irrigation. By chance, during his research, he stumbled upon a NASA article detailing high pressure aeroponics, a technology developed originally in the 1980s as a method to grow produce on space missions.

The deeper Pool got into the science, the more he believed this was the way forward.

“It took me about six years to get a few system up and running,” Pool says, looking back. “I did all of the initial work in my home and it was promising. I could get the system up and going, leave it for a couple weeks and come back to it running just fine. I could grow produce very quickly and that was the major thing. Just with this first very rudimentary system, I could shorten growth cycles considerably.”

With the technology, even in a very early stage, developed and tested, Pool knew that he needed some help with the business aspects of bringing his system to market. Among those at the top of Pool’s list was Clayton Mooney, a former classmate at Indian Hills Community College who had spent time as a professional poker player among other things.

“Initially, I told him I’d be happy to look at his business plan and help him make connections here in Ames,” Mooney says. “I wasn’t really looking to get into something like this because I had a commitment coming up at Startup Ireland in Dublin. I told him I would take the summer to think about it.”

The summer in Dublin offered Mooney the time and space to consider the potential in full. The more he thought about it, he says, the more intrigued he became. Upon returning to Iowa, he was ready to partner with Pool to move the business forward. Mooney became the Chief Executive Officer, they settled on the name AeroLands, and began the startup process in earnest.

In the search for help in solving the automation challenge, Pool and Mooney met Mahmoud Parto, who would eventually become the Chief Software Architect and final member of the founding team. Mooney met Parto within the CYstarters cohort in summer of 2016. After learning of his background in computer and software engineering, Mooney asked Parto if he’d been interested in learning more about the company. 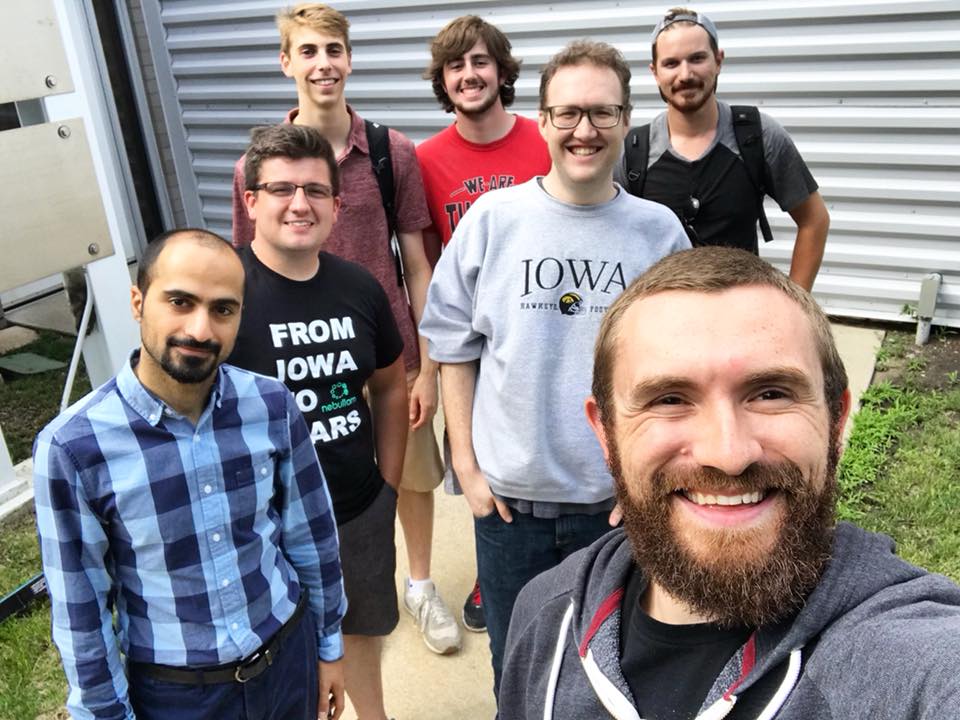 Initially, Pool and Mooney were just looking for a little help.

“When I showed him what we were working with in terms of automation, I was most interested in whether he could help us to reduce the cost of the equipment we were using to measure things like temperature and humidity,” Mooney says. “He came out of that meeting and was able to build us a working prototype with the same functionality, plus Bluetooth capability, for next to nothing.”

It was then, Pool and Mooney knew that Parto could play a pivotal role.

“I remember calling Danen that night,” Mooney says. “I told him we had to get Mahmoud on the team. We decided that night to offer him equity as a co-founder.”

Parto couldn’t commit to the idea at first.

“He told us he’d rather just help us out in the short term,” Mooney recalls. “But I think the gears started turning and it wasn’t long before he saw the potential and reached back out to accept our offer.”

With a full founding team established, the trio began looking for opportunities to get bigger and better. In December of 2016, they were accepted into the second cohort of the ISU Startup Factory.

The Startup Factory schooled the group on best practices in building a business while pushing them into a formal customer discovery process. The year-long program proved invaluable in clarifying the vision, developing a plan for growth, completing a friends and family round of investment, and preparing the team for pitching to larger investors. They also settled on the name change to Nebullam during their participation.

As part of their participation in the Startup Factory, the team was provided office space in the Vermeer building in the Iowa State University Research Park. With a location so close to Iowa State, it offered more than a place for meetings and to sit down in front of a laptop. It offered access to top tier interns to move the company forward.

Now “graduates” of the Startup Factory and a series of other accelerators and business development programs, the team at Nebullam has swelled to 10. They have settled on a hardware + software model that will enable indoor growers to leverage AI to fully automate the growing and harvesting process.

“The vast majority of indoor grow operations currently employ a producer-to-product model,” Pool says. “That means that the staff has to go to the product to plant it, tend to it, and harvest it, a method that isn’t much different from traditional farming.”

Nebullam, however, is developing proof of concept on a product-to-producer model. The plants would come to the producer, at a central transplanting and harvesting point. Using an elaborate network that learns with each crop cycle, everything is managed by AI – from what minerals are needed to spur growth, to when a given crop is ready for harvest.

This is a major differentiating factor for Nebullam when compared to others in the marketspace.

“There are a lot of startups on the hardware side, and a lot of others on the software side,” Pool says. “But running those varied systems together, there is a huge learning curve for the producer. We eliminate that. If you are powering your grow with Nebullam, we’ve eliminated any compatibility issues or learning curves.”

With Nebullam’s technology, when crops are ready to be picked, the system is automated to perform the entire process from harvesting and cleaning conveyor belts to planting the next crop.

“Everything will be monitored,” Pool says. “That monitoring will continually inform the network on what is working with a specific crop and help us to increase efficiencies and yields over time. The more we can automate, the more we can address the initial concerns that were raised in the infancy of our business about labor eating into our margins.”

The plan is being put into practice at the company’s second model farm, located in space at the ISU Research Park.

Nebullam’s vision – and the addition of Model Farm 2 – has been met with interest. The company was recently a top 3 finisher in the Young Entrepreneur Convention Pitch Competition, which is one of the largest single-day pitch competitions in the world. Through that, the team earned a coveted spot in angel investor Jason Calacanis’ intensive program for founders, Founder University. They have also reached the finals of a handful of other prestigious pitch and business plan competitions as they continue to identify individual accredited investors and venture capitalist firms to partner with in moving Nebullam along.

The team is confident they will find the right partner to bring Nebullam’s idea into practice on a large scale. And once that happens, the team is ready to shoot for the moon … or beyond.

“Our technology is applicable in zero gravity conditions,” Pool says with a smile.

“Seriously,” Mooney quickly adds, “we think we can complement a lot of the companies that are figuring out space travel. We might be nerding out a bit, but we are less than 1,500 days away from a spaceship landing on Mars. We are less than 2,500 days away from being a multi-planetary species. Who knows? Maybe our technology will be the one that makes it possible to nourish people as they explore space.”

While there is plenty to be done in those 2,500 days to make it happen, Mooney says the team is ready to do what it takes to make Nebullam a household name.

“The juice is always worth the squeeze,” he says.