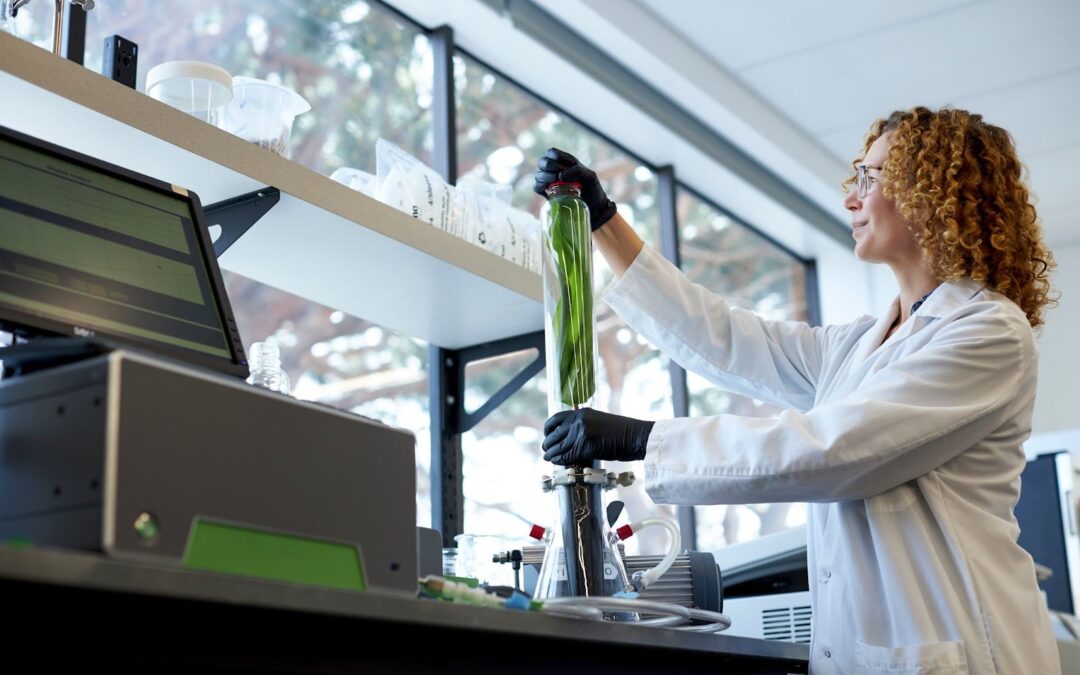 By Michael Crumb, Senior Staff Writer
Tuesday, July 27, 2021 10:16 AM
A company that has set down roots at the Iowa State University Research Park in Ames has developed a product that allows farmers to apply nitrogen in a more predictable and consistent manner, and reduces the risk of runoff by eliminating surface applications of chemical fertilizer later on.

Pivot Bio recently released Pivot Bio Proven 40, the latest in its line of products for corn, wheat and sorghum farmers. It’s a microbe that is applied in a liquid beneath or on top of the seed when it is planted. It adheres to the sticky substance on the skin of a plant’s roots, multiplies, and produces nitrogen at increasing levels as the plant grows.That compares with traditional fertilizer applications, where the amounts decline each day after it is applied, said Mark Reisinger, the company’s vice president of commercial operations at its customer success center in Ames.“You’re never going to have more nitrogen in your soil than the day you apply it,” he said of traditional applications. “Every day thereafter you have less.”Between 40% and 60% of traditionally applied fertilizer is lost, Reisinger said, with factors such as heavy rain, light soils and temperatures contributing to that loss.“This is the first nitrogen product that doesn’t sit on the classic degradation curve,” Reisinger said. “This actually increases the amount of nitrogen in the field minute by minute, hour by hour, day by day — as we go through that cycle, the plant is taking up more nitrogen. Why does it increase? It increases because it’s expanding its colonization as it goes.”Reisinger said that while many factors affect crop yields, Pivot Bio’s product can help provide consistent, predictable nitrogen application without the environmental risks of traditional application.Pivot Bio claims its products can prevent $200 billion of environmental damage caused by runoff over the next decade.The lack of waste from runoff and less machinery and energy needed for traditional application gives farmers a bigger bang for their dollar, he said.For example, if a farmer applies 40 pounds of fertilizer per acre, much of that fertilizer will dissipate and not be used by the plant. Pivot Bio’s latest product allows farmers to apply less than a half a gallon per acre with the microbes colonizing and growing over the growth cycle of a plant to reach that 40-pound potential, Reisinger said.“The big advantage is we apply with the seed,” he said recently while looking for plots for his product in Franklin County. “When you go through your field and plant your seed, you put us down. If you’re using one of the other [synthetic fertilizers], you have a dedicated path of heavy equipment across that field simply to put down your nitrogen.”Pivot Bio’s work is targeted specifically toward “cereal crops” like corn and wheat. Their product is not designed for soybeans because soybeans already grow nodes on their roots that produce nitrogen.But with soybeans, a lot of energy from the plant is spent producing that nitrogen. So rather than drag that energy out of the plant, the plant and the nitrogen-producing microbe produced by Pivot Bio live and grow in a symbiotic state, Reisinger said.He said Pivot Bio’s products are one step closer to the decadeslong work of seed developers trying to develop corn and wheat that will produce their own nitrogen.Company co-founders Karsten Temme and Alvin Tamsir began their work supported by early grants from the Gates Foundation in 2011, and after years of research released their first commercial product for corn to U.S. farmers in 2019.Recently, Pivot Bio received $430 million from San Francisco-based venture capital firm DCVC and Singapore-based global investment company Temasek.Reisinger said that injection of financial support will help Pivot Bio “immediately expand internationally.”“That means investors have confidence in our products,” he said. “They’ve done their due diligence. They’ve looked at this with their own science teams and they have confidence that our product does what we claim it does. So they’re giving us the money to build out more rapidly, which is a fantastic opportunity for us.”Pivot Bio currently has more than 250 employees across the U.S. Thirty-one of those work in Iowa, with 17 located at the ISU Research Park in Ames. It has six core locations, including lab facilities in Berkeley, Calif., Boston, and St. Louis; greenhouses in Hayward, Calif.; a warehouse operation in Chicago; and the Customer Success Center in Ames, where an open house is planned for Aug. 26.Currently, Pivot Bio products are used on 1 million acres of farmland in the U.S., still only a small slice of the total acres planted nationwide, but company officials say they hope to chip away at the $60 billion of synthetic nitrogen fertilizer sold each year.Reisinger said the company realizes displacing some of that market is a tall order, comparing it to the biofuels industry going up against oil companies.“The competition in this space is established,” he said. “They have relied on huge investments in bricks and mortar and mining to produce. And in truth, we can’t be too critical of what has come before us because 50% of the world’s population is dependent on our ag industry doing exactly what it has done for years, but that doesn’t mean there isn’t a better way.”