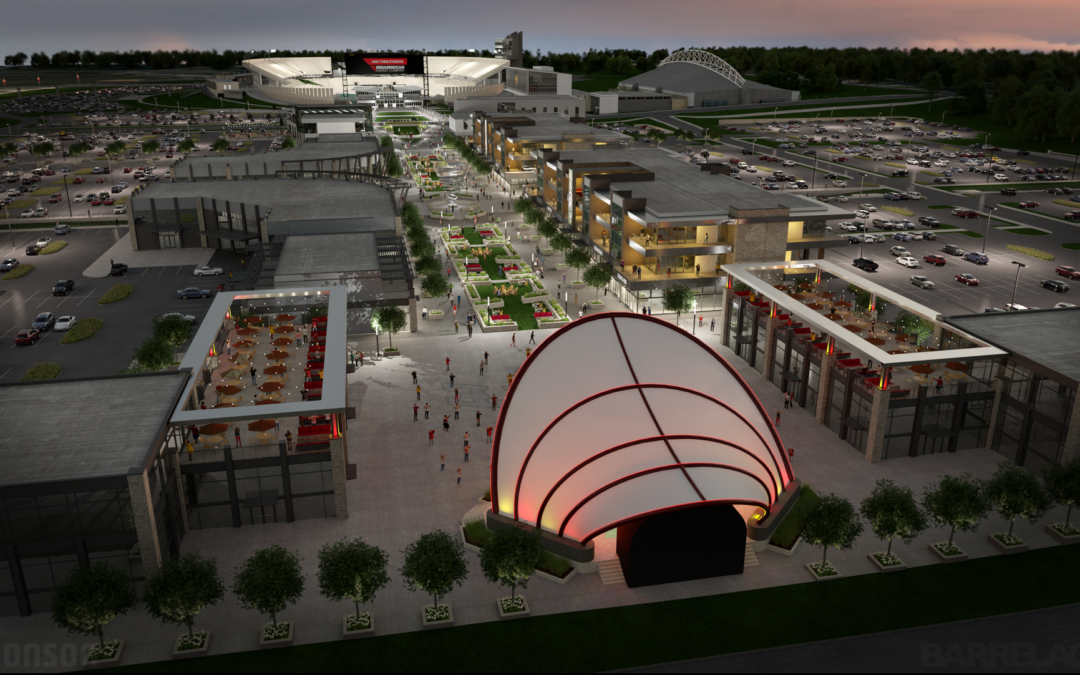 Ames, Iowa—More than half a century after the first Iowa State Center building opened, Iowa State University is proposing an innovative plan to reimagine its landmark educational, cultural and athletic complex – a development that will create CYTown, a community destination spot to be built between Jack Trice Stadium and Hilton Coliseum.

Plans and future steps in CYTown’s development are subject to final approval from the Iowa Board of Regents.

CYTown will capitalize on its unique location in the heart of the Iowa State Center to attract more visitors to the Iowa State and Ames communities, spur economic growth, and afford new amenities to students, faculty, staff and residents to enjoy while complementing Ames’ reputation as an outstanding community to live, work, play or attend school.

The proposed CYTown development builds upon significant investment in several recently completed projects that have enhanced the gateway to the university. These projects include the:

“We are excited to build upon that momentum as we unveil plans for CYTown, which will be the nation’s first multi-use district built on a college campus,” said Iowa State Director of Athletics Jamie Pollard. “Using the university as an anchor, the Iowa State Research Park as a catalyst, and Cyclone Athletics and Iowa State Center events as drivers, we believe CYTown will build upon Dr. Hilton’s vision and further transform the Iowa State experience and Ames community while generating resources to reinvest in the Iowa State Center.”

CYTown is envisioned to be similar in concept to other projects around the country that have been recently developed near sports facilities. Two recent examples are Titletown near historic Lambeau Field, home of the NFL’s Green Bay Packers, and Kansas City’s Power & Light District, which is located steps from the T-Mobile Center, the annual home of the Big 12 Men’s and Women’s Basketball Championships.

“Since we started this process, our goal has been to develop something unique to Ames while helping our community support, attract, and retain students, businesses, visitors and new residents, and we believe CYTown will accomplish all of that and more,”  Pollard added. “A vibrant entertainment district that runs from campus through the Iowa State Center to the ISU Research Park will be a game-changer for our entire community.”

Wintersteen transferred oversight of the Iowa State Center to the ISU Athletics Department more than three years ago. She charged the department with developing a comprehensive plan to enhance Stephens Auditorium, Fisher Theater and the Scheman Building, all of which were built entirely with private gifts in the late 1960s and early 1970s. The facilities, which have hosted more than 20,000 events and countless visitors over the years, are now in need of significant upgrades.

While the COVID-19 pandemic slowed ISU’s initial planning process, it picked up steam over the last year. In June 2022, the Iowa Board of Regents approved the university’s request to start planning for long-overdue improvements to the parking lots between Jack Trice Stadium and the Iowa State Center. That $25 million project will include new paving and lighting systems, and installation of the utility infrastructure necessary to support future site development.

Target completion of the parking lot improvements and infrastructure is August 2025. Later this fall, the university plans to seek final approval from the Board of Regents to begin work on the project in January 2023.

Future phases of CYTown are expected to include construction of approximately 135,000-square feet of space that is anticipated to house a medical facility, as well as a mix of retail, office space and luxury suites. CYTown will occupy the area now known as “Tent Row” between Jack Trice Stadium and the Iowa State Center. CYTown’s initial phase also includes an outdoor public plaza and amphitheater area that can be used on game days, or for local concerts or other special events.

“The CYTown plan fits perfectly with our long-term vision of growing the amenities in and around the Iowa State University Research Park,” said Rick Sanders, ISU Research Park Executive Director. “Our board believes this is an incredible growth opportunity for the ISU Research Park and comes at the perfect time in our history. Creating this kind of mixed-use site would help energize the whole area, becoming a real asset for us in promoting Ames to even more innovators and entrepreneurs.”

It is expected that 75% of the funds needed for the $200M project will come from land monetization opportunities with the balance coming from the leasing of 20 CYTown Suites and fundraising. Funding for the parking lot improvements and infrastructure will come from university and athletics funds, which will be repaid, over time, by project revenues. The parking lot improvements were necessary, regardless of the CYTown development, for the safety of visitors, faculty, staff and students who park there on a daily basis.

The long-term vision for CYTown may include renovated event space and improvements to Hilton Coliseum, paved parking lots on the east side of University Boulevard and a hotel and convention center south of the Scheman Building.

When completed, the district will breathe new life into the entire Iowa State Center, especially Stephens Auditorium. Named a “Building of the Century” in 2004 by the Iowa Chapter of the American Institute of Architects, the facility has an estimated $25 million backlog in deferred maintenance costs.

In an initial step toward improvements, new paved parking lots for patrons adjacent on the northwest corner of the Iowa State Center were completed this past summer, including installation of new stormwater detention and sediment filtration system designed to mitigate flooding.

1955:  A committee is formed to develop the Iowa State Center.

1962:  A national fundraising campaign is launched by the Iowa State Foundation.

1965:  Ground broken for the construction of Stephens Auditorium.

June 16, 1968:  Ground broken for the construction of Hilton Coliseum.

1969:  Stephens Auditorium is completed at a cost of $4.9 million and the New York Philharmonic Orchestra presented a five-performance week-long concert festival. The 2,747-seat auditorium was named Building of the Century by the American Institute of Architects, Iowa Chapter, in 2004.

Dec. 2, 1971:  Coach Maury John began his Iowa State head coaching career with a 71-54 victory over Arizona in the first-ever athletic contest in Hilton Coliseum, which was named after former ISU President Dr. James H. Hilton, who cast the vision for the Iowa State Center.

1974: The 450-seat Fisher Theater, built at a cost of $950,000, opens. Fisher Theater was named for University and Iowa State Center benefactor J.W. Fisher of Marshalltown, Iowa, and is primarily used by ISU student theater and dance groups.

1975:  The heart of the Iowa State Center, the $5.3 million Scheman Building, is named for ISU alumnus Carl Scheman, who provided a $1 million gift toward the Iowa State Center. Scheman hosts small and large conferences, board meetings, pre-event functions, wedding receptions and other special events.

The Brunnier Art Museum, Iowa’s only accredited museum emphasizing a decorative arts collection, is also housed within the Scheman Building.

September 20, 1975:  Iowa State christens $7.6 million Cyclone Stadium/Jack Trice Field with a 17-12 win over Air Force. The stadium, which has been expanded four times and now lists a capacity of 61,500, has also undergone multiple renovations since opening.

September 5, 2015:  The Sukup End Zone Club opens as part of a $60 million project to enclose the south end zone at Jack Trice Stadium and increase stadium capacity to 61,500, making it the Big 12 Conference’s third-largest stadium. Bobbi and Roy Reiman were the project’s lead donors with a $30 million gift, the largest in ISU history.

September 3, 2022:  A $10 million pedestrian bridge opens over University Avenue to connect the new RV Village to Jack Trice Stadium, while enhanced parking north of the ISU Center and an RV Village also come on-line at a cost of $14 million.