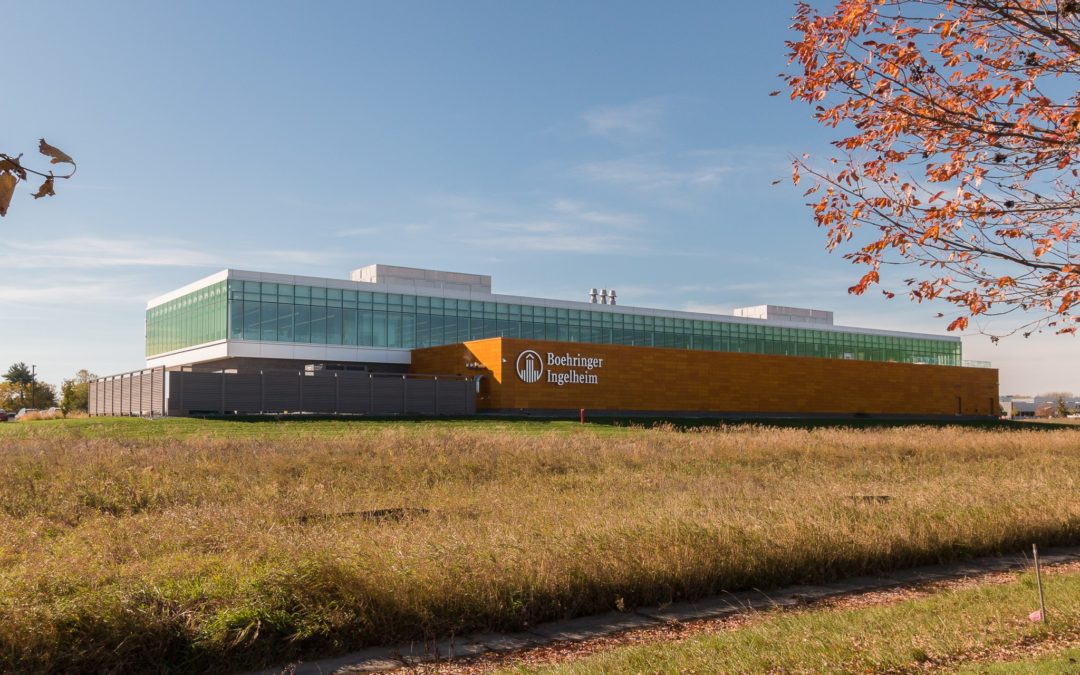 It would have been hard for Dr. Mike Roof to envision where he is today, considering his modest beginnings in the Iowa State University (ISU) Research Park. More than two decades ago, as a graduate student at Iowa State, Roof was one of the scientists working on a breakthrough salmonella vaccine for pigs.

Shortly after Roof earned his doctoral degree, a company called NOBL licensed the vaccine. The company, which was based in Sioux Center, Iowa, then leased an office for Roof and one other employee in the Research Park. It was a small company and Roof moved into the professional world with few frills.

He says those humble beginnings laid the ground work for big things down the road.

“By leasing a small space in the Research Park, we were able to limit the amount of capital we needed to spend, while still having the flexibility to grow as we had the need,” says Roof, who joined the NOBL team in 1991. “Most importantly, though, it really gave us an ‘in’ in the Iowa State community. We had access to recruit some of the best talent in our field in the world, to the expansive library on campus, to experts in molecular biology and other fields, and to essentially any other resource we possibly needed. It was the smartest move we could have made.”

As the technical work of getting the vaccine to market progressed, Roof’s work regularly moved between Sioux Center and Ames. Advancing from concept through trials and eventually to market, NOBL experienced significant growth. Much of that growth came in the Research Park.

“We literally started with one room in one building,” Roof says. Eric Vaughn, a research scientist and project leader at Boehringer Ingelheim (BI) , says it’s been incredible to watch.

“One room became two, two became five, five became 10 and eventually we occupied a building,” he says. “The key driver for it all has been being in Ames and being so close to ISU and the veterinary regulatory agencies like the National Veterinary Services Laboratories.”

It wasn’t long before much bigger companies began to take notice of the promising products being presented by NOBL. In 1997, Germany-based international pharmaceutical firm BI acquired NOBL.

“At the time of the acquisition, BI only had a single swine product,” recalls Roof, who today is BI’s executive director of biological research and development and the site manager for the Ames location. “In gaining the NOBL line, their product catalog grew exponentially.”

In time, so did the business. A lot of the growth, Roof says, had to do with the model they followed in Ames. With a close relationship to the university, an acquisition strategy that targeted expanded market access, and a commitment to top-notch research and development, BI had developed a winning formula.

“There are so many advantages to locating a business like ours in a community like Ames,” Roof says. “It is an easy place to recruit those just entering the job market, like interns, grad students and those from other similar universities. But it is also an attractive place to relocate for those established in the industry. Ames has a high quality of life with, generally, a lower cost of living. It’s a win-win.”

It is also a model that BI has rolled out in other communities internationally. They used a similar set-up at research and development facilities in both China and Germany.

In early 2016, BI took their presence in the ISU Research Park a step further. After leasing space for decades, they built a facility at the east entrance to the Park. The building, aesthetically stunning and functionally magnificent, represents a large capital investment in the Research Park that has given it so much.

“It is almost impossible to believe that from that single office we would someday grow to occupy a 52,000 square foot facility of our own,” Roof says.

While massive, the building has actually brought many of BI’s most gifted minds closer together. In leasing space previously, the company’s labs were spread out. There was little interaction among teams and a fair amount of inefficiency in the research and development function.

The new building allowed the leadership team to work closely with those who were on the frontlines to craft a space to meet specific needs. Vaughn says it has been a breath of fresh air.

“There is a synergy in having our research and development teams co-located,” he says. “It increases the efficiency having everyone together, and it also offers the opportunity to pop in on other team members or those on other teams who may be able to help with specific challenges. It has really enhanced interaction.”

Dianna Jordan, a principal scientist, says there were some growing pains initially. But today, it’s easy to see how BI is benefitting from the capital investment.

“We have good, driven, quality people who have a passion for developing tools to help producers,” she says. “By offering them space to work in a state-of-the-art building that connects them easily with other brilliant minds, just further enhances the research environment. It has streamlined a lot of what we do.”

An Appreciation for Ames

Roof offers credit to the city of Ames and the leadership of the ISU Research Park, for the success of the BI model. He also says it is valuable to be surrounded—literally—by companies making groundbreaking advancements day after day.

“Steve Carter (ISU Research Park CEO) and his team get it,” Roof says. “The Park has reached a critical mass where it is now a recruiting tool in and of itself. It has a reputation for offering opportunities in a number of industries for those at the top of their field. It is seen as a success and, in a lot of respects, a model for communities across the country.”

With BI poised for continued growth, Ames and the Research Park will continue to benefit.

Vaughn says it’s impossible to fully grasp where BI is today—or how operations will continue to grow to serve more from the new facility.

“It all started with Mike Roof and a coffee pot,” Vaughn says with a chuckle. “We started as a small group highly focused on research and development. And here we are today. It is exciting to dream about what the next 5 or 10 or 20 years will hold.”