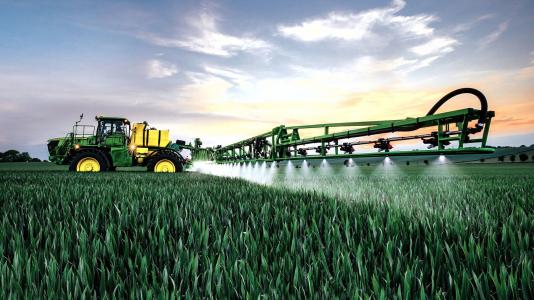 The following article originally appeared on July 22, 2019 via the Ames Tribune.

A two-decade relationship between a giant agricultural company and Iowa State University just got stronger.

“The relationship with Iowa State University and John Deere is stronger then its ever been and it’s going to continue to be that way,” said Lydia Hornung, communications manager for John Deere Des Moines Works.

The only other facility that is similar and connected to a university in the United States is at the University of Illinois-Urbana Champaign campus, Hornung said.

Deere began its relationship with the ISU College of Agriculture 22 years ago.

Over the past five years, the company has had its presence felt at the research park, but Deere realized it needed its own facility. The plan to build its own research facility had been in the works for nearly three years, said Rick Sanders, research park president.

Although the facility is in the central part of the country, its mission is to impact lives across the globe, said Matthew Darr, associate professor of agricultural and biosystem engineering at Iowa State.

“The innovations that are driven at this facility are ones we’re going to see have a tremendous impact both here in central Iowa, and globally,” he said.

Darr has worked closely with Deere and was awarded $4.6 million in research from Deere and the Iowa Soybean Association throughout the 2019 fiscal year, according to a prior report by the Ames Tribune.

Prior to this new facility, the sprayer developers were forced to travel away from Iowa during the winter months to test and see their results. But now with the new indoor facility in Ames, the employees will have a short commute, but also offer select ISU students to assist in the process.

“Besides us having the access to the students that the university has to offer, the university also benefits as it gives their students a chance to get real world experience,” Hornung said.

Deere will have just a few people employed at the new facility and will rely on the small group of part-time student workers to assist on their projects. Hornung said the number of students would vary by semester.

Besides the facility having the latest and greatest technology to assist in advancing the sprayers, the building was designed to be extremely environmentally friendly.

“They have multiple systems in place to make sure nothing leaves the facility that they don’t intend to,” Sanders said. “No contaminants in the water or soil, and they’re making sure they reuse every drop of water multiple times, and are really focused on maintaining and controlling everything.”

Both Deere and the university see this opportunity as a win-win scenario as both parties benefit in some shape and are all excited, Sanders said.

“This is a really, really exciting day for everyone,” Sanders said. “It’s a demonstration on why the research park exists and that Iowa State University’s mission of rolling out technology and knowledge in order to benefit Iowa and the world is happening.”